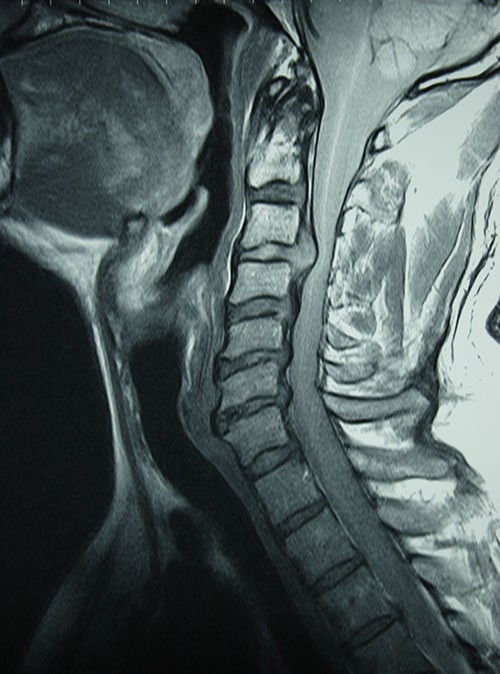 An anterior cervical discectomy and fusion (ACDF) is a combined surgical procedure that we use to decompress spinal nerves and stabilize the cervical spine (neck). We perform this surgery to relieve pain, numbness and weakness in the neck, shoulder, and arms, and to provide stability in the cervical (neck) portion of the spine.

We generally recommend an ACDF to remove a damaged disc that is causing debilitating pain due to compressed nerves or when there is excessive motion between the vertebrae. This can be due to a fracture or congenital anomaly, but the majority of patients develop damage from progressive, chronic degenerative disease. Often, this occurs as a result of osteoarthritis or a herniated disc.

An ACDF is considered when there has been severe damage to the upper spine due to a fracture, a congenital anomaly, or a disc condition such as osteoarthritis or herniation. An ACDF is usually performed when a patient is experiencing debilitating pain because cervical nerves are being compressed or when there is excessive motion between the vertebrae of the cervical spine.

The Sierra Spine doctors perform the ACDF procedure using a minimally invasive technique where they make a small incision in the front (anterior) and to the side of the neck. This approach lets us access the disc without disturbing the neck muscles and uninvolved spinal nerves.

The surgery itself is made up of two parts:
1. Discectomy – The damaged disc is removed through the small incision that was made. This eliminates pressure on the compressed nerve, thus relieving the pain and other symptoms the compression causes.
2. Fusion – A bone graft or implant device is inserted in the empty space where the damaged disc was to provide strength and stability to the area.

While it takes several months for the bones to fully fuse together, most patients feel better within a few weeks of the surgery.